New REdi Program Manager on Board 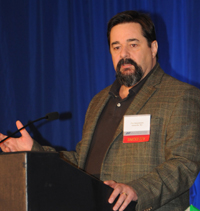 Story and Photo by Gerald Sonnenberg EES Marketing and Communication

ORLANDO, FL – Phil Hargreaves, MSN, RN, Joined the SimLEARN program as the REdI Program manager on April 23. Mr. Hargreaves is a native of Sydney, Australia, and has been living in Asheville, NC, since immigrating to the United States in 2001. He began his VA career in 2002. Mr. Hargreaves has worked as a critical care staff nurse, nurse educator and nurse manager during his 28-year career. He has also worked in a multitude of clinical environments including complex “big city” intensive care units, as well as in remote Central Australian Aboriginal communities. .

During his career he has been heavily involved in clinical informatics and leveraging technologies to enhance the role of the clinician and improve patient outcomes. During his time at the Asheville VA Medical Center, Mr. Hargreaves served as the medical intensive care unit nurse manager, facility patient safety officer and, recently, as faculty in the VA Nursing Academy program. He has led national and Veteran Integrated Service Network information technology and equipment technical advisory panels. Most recently Mr. Hargreaves was detailed to the Assistant Deputy Undersecretary for Workforce Services to help stand up the new office in D.C.

He earned his bachelor’s and master’s of nursing degrees through Monash University in Australia, and is currently pursuing a doctorate in nursing practice. Mr. Hargreaves is particularly interested in health care leadership in human resource management and development, especially as it pertains to the personal impact on expert clinicians as they transition into leadership roles.