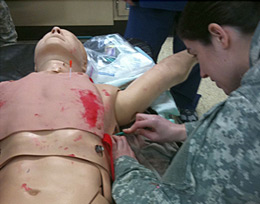 Madigan Army Medical Center's Anderson Simulation Center (ASC) is located on Joint Base Lewis-McChord, Wash. Since its inception in 2002, the ASC has trained over 29,000 physicians, residents, nurses, medics and deploying soldiers to deal with medical emergencies and learn new skills using realistic cutting-edge medical simulation. The 8,000-square foot facility is housed a half-mile away from the main hospital.

The multiple goals of the ASC include:

University of Washington (UW) Family Medicine faculty participate in the Simulation Olympics at the ASC to learn from the fellows how to develop, run and debrief simulated scenarios. The added realism helped the UW residents realize the importance of establishing leadership and other roles in a code situation, knowing where the code carts are located and practicing ahead of time on the equipment. The fellows also use ASC task trainers to teach "bread and butter" family medicine procedures.

Another major focus at the ASC is simulation research. The staff has over 30 peer-reviewed publications and has given more than 80 presentations at local and national meetings. The ASC serves as the headquarters for the Central Simulation Committee, which oversees the residency simulation training for 10 different medical specialties at all 10 Army training hospitals across the country.

The ASC has received numerous national honors. In 2006, the ASC became the first Department of Defense institution accredited by the American College of Surgeons as a Level I Educational Institution. The American Urologic Association recently chose it as one of only six sites in the U.S. to be a test site for a new laparoscopic nephrectomy simulator. The ASC was accepted as an official member of the American College of Obstetrics and Gynecology's Simulation Consortium in October 2009. The ASC was also designated a Center of Excellence by Tricare Management Activity for its work in integrating simulation and TeamSTEPPS training.