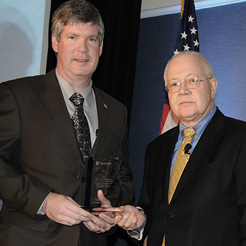 Department of Veterans Affairs Under Secretary for Health, Dr. Robert A. Petzel presented each with the award at a special VHA Clinical Simulation break-out session during the International Meeting of Simulation in Healthcare in New Orleans Jan. 24.

Dr. Gaba was recognized with the 2011 Excellence in Clinical Simulation Training, Education and Research Practice Award for his numerous contributions to the field of clinical simulation over the past two decades. Dr. Gaba created the first modern mannequin-based fully interactive simulator, which has since been commercialized and, along with his curricula, is in use in thousands of simulation training and education programs around the world. He has also conducted ground-breaking research in Crisis Resource Management (CRM) in clinical care settings and has designed CRM-oriented simulation instructor training designed to improve patient safety outcomes.