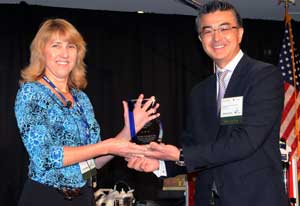 The award was established to recognize clinical leaders who have supported and advanced VHA�s strategic plan for clinical simulation. Haru Okuda, MD, National Medical Director for the Simulation Learning, Education and Research Network (SimLEARN), presented Ms. Cochran with the award at a special VHA clinical simulation break-out session during the International Meeting of Simulation in Healthcare (IMSH) in San Diego.

Ms. Cochran serves as the Simulation Center Coordinator for the Malcom Randall VA Medical Center in Gainesville, Fla., and was recognized with the award for her many contributions in the field of clinical simulation.

Among her accomplishments was leading the creation of a simulation center for medicine, nursing, surgery, anesthesia and respiratory therapy. Known as the Interdisciplinary Simulation Education Center (ISEC), this center has had an impact on patient safety issues throughout the Gainesville VAMC using simulation techniques. She also developed simulation-based education and training to resolve these issues, and assists in the development of simulation-based curriculum for training residents and students, and provides simulation instructor training.

Shortly after receiving her award, Denise Cochran, RN, BSN, (right) participated in a simulation with Joel Ottoson, RN, MSN, during the VHA breakout session of the International Meeting of Simulation in Healthcare Jan. 29. (VA photo by Gerald Sonnenberg) 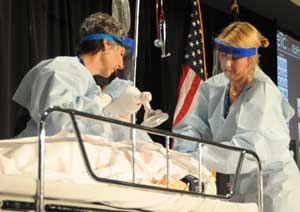 Ms. Cochran developed simulation components for pelvic and breast exams for the Mini-Residency Program on Primary Health Care for Women Veterans, and she is involved in several national VHA clinical simulation projects to expand and promote simulation training.

"Everybody kicked in to develop the ISEC. Some contributed equipment, and some contributed personnel," said Ms. Cochran. "Receiving this award shows it doesn�t take a lot to integrate simulation into programming. Believe and put forward the effort."