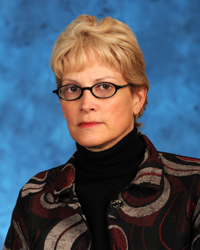 Story and Photo by Gerald Sonnenberg EES Marketing and Communication

WASHINGTON, DC — SimLEARN would like to thank one of its original “Sim Champions,” Louise Van Diepen, Acting Chief Learning Officer, VHA Employee Education System, for her tireless efforts in support of VHA simulation. Ms. Van Diepen retired May 18 after more than 30 years of Federal service.

Previously, Ms. Van Diepen was the VHA chief of staff. She also served as VHA’s Assistant Deputy Under Secretary for Health for Clinical and Operations Support. In that role, she supervised 14 senior executive service chief officers and oversaw the execution of their national programs.

Throughout her VA career, Ms. Van Diepen held positions at VA Central Office (VACO), a VA medical center and at two private corporations. She began her national program leadership at the VACO in 1988 as the head of clinical pharmacy/quality management programs for VHA. In 1994, she left government service to pursue private sector opportunities with a national corporation, participating in information technology development as the clinical director of software development, and was subsequently recruited to an executive leadership position. She returned to government service in 1999 and resumed various clinical management and leadership roles in the Office of the Medical Inspector and the Office of Quality and Performance.

Ms. Van Diepen earned her bachelor’s and master’s degrees in pharmacy from the University of New Mexico. She was formerly an adjunct faculty member and pharmacy residency director at the College of Pharmacy of the University of New Mexico. She is a licensed pharmacist in three states: Virginia, California and New Mexico. She is also nationally certified in geriatric pharmacy and is a fellow in the American Society of Health Systems Pharmacists. She is a recipient of the Meritorious Presidential Rank Award, VA Distinguished Career Award, Secretary’s Exceptional Service Award, the Arthur Flemming Award for Leadership and a number of Under Secretary commendations.

The SimLEARN staff and Simulation Community of Practice wish her “fair winds and following seas.” She has left a lasting legacy that will serve as the foundation for improving clinical workforce development and patient outcomes for our Veterans.