Dr. Haru Okuda, SimLEARN national medical director, then briefed the visitors on the VHA national simulation network and its next steps, provided an overview brief of SimLEARN, delivered a demonstration of the simulator and gave them a short tour of the simulation center.

"Ongoing projects, including the VMC, training standardization products under development and the growing collection of online-based best simulation practices, are important to the future of VA health care," said Gibson, during his visit. "VMC is an avatar-based system that allows Veterans freedom of choice in selecting virtual avenues of Veteran controlled care. It is a ‘best practice tool’ for collecting, assembling and offering a single point for videos, vector-based simulation clips, process and practices in a one-stop environment." 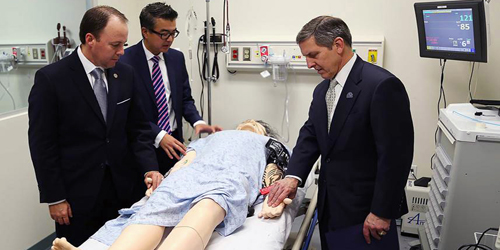