ANCHORAGE, Alaska – Since 2005, the non-profit organization Honor Flight Network has transported more than 160,000 Veterans of World War II and other conflicts to Washington D.C. to spend one day visiting the various monuments built in their honor, at no cost to the participant. Each Veteran is required to bring an escort to assist them on their journey. These Honor Flight Guardians are made up of family, friends and volunteers, and are an essential component of the success of the mission.

The Last Frontier Honor Flight hub in Big Lake, Alaska is making use of VHA’s Simulation Learning, Education and Research Network’s (SimLEARN’s) Resuscitation Education Initiative (REdI), as well as volunteers from the Alaska Veterans Affairs Healthcare System and Regional Office (AVAHSRO) to train their guardians in cardiopulmonary resuscitation (CPR). REdI, which is based at SimLEARN in Orlando, Florida, is a national program to standardize, document, track and monitor the provision of Advanced Cardiac Life Support (ACLS) and Basic Life Support (BLS) training throughout VHA.

“The REdI program allows us and supports us to provide this training,” said Vicki Cushing-Breeden, a nurse practitioner at the AVAHSRO. She, along with her husband Rex Breeden, a VA police officer, are BLS instructors and have been training Honor Flight Guardians for three years ever since Cushing-Breeden first heard about the Honor Flight from another staff member. They contacted the organization to discuss the friends and family CPR program. It met the Honor Flight’s needs to train the Guardians.

“I love the training kits that REdI gives us. They allow us to give these to the guardians, and they can refresh the training if they want and hopefully never have to use it,” explained Cushing-Breeden. “The kits really make a difference because cardiac arrest and choking can happen to anyone at any time, so it may help them help someone else; maybe even one of their own family.”

Both of them are Veterans themselves. Cushing-Breeden served in the Army Reserve as a nurse from 1993-2003 in Florida, and Breeden retired from the Air Force after 24 years of active duty as an Air Force Security Forces member.

“When I was approached by Ron, the Honor Flight president, I was more than impressed with his enthusiasm about the Honor Flight and getting it started here in Alaska (in 2013),” said Breeden.  “Since then, Vic and I have done all the CPR training, and every time we get so many ‘thank-you’s,’ from every one of the Guardians and Veterans, (it) makes the whole day worthwhile.”

VA’s connection to the Honor Flight Network is nothing new. The program was started by a VA employee in 2005. According to the organization’s website, Earl Morse retired from the Air Force as a captain in 1998 and was then hired by the Department of Veterans Affairs to work in a small clinic in Springfield, Ohio as a physician assistant. In May of 2004, the World War II Memorial was completed and dedicated in Washington, D.C. It quickly became the topic of discussion among his World War II Veteran patients.

Earl repeatedly asked these Veterans if they would ever travel out to visit their memorial. Most felt that eventually, somehow, they would make it to D.C., perhaps with a family member or friend. Earl was also a private pilot and a member of one of the nation’s largest aero clubs located at Wright-Patterson Air Force Base in Dayton, Ohio. At that point, things started coming together; soon, other dedicated volunteers joined, a board was formed, funds were raised and that first flight took to the air in May of 2005. Six small planes flew 12 Veterans out to Manassas, Virginia, just outside of Washington, D.C. Vans then transported the pilots and Veterans into D.C., and to the World War II Memorial.

The program’s success has blossomed into an Honor Flight Network of 130 hubs in 44 states, and volunteers like Breeden and Cushing-Breeden know that the organization’s mission becomes more pressing as the years pass. Approximately 500 World War II Veterans alone pass away each day, according to The National World War II Museum.

The couple expects they will one day be Guardians themselves, but what they do now is a small, yet important part of the Honor Flight Network. To this point, they were recently presented a letter of appreciation from The Last Frontier Honor Flight hub.

It said, in part, “The Last Frontier Honor Flight would like to express our appreciation for the support you give to us as we prepare to take our Veterans to Washington, D.C. to see their memorials … For the last several years you have graciously given of your time and experience in providing CPR and other lifesaving training to our Guardians … Having this training available makes a huge difference in preparing our Guardians to escort our Veterans.”

Breeden said, “There’s not too many outside events that I have been a part of that provides me more satisfaction and/or pleasure to help with. Luckily, they have had no issues so far, and CPR has not had to be performed on any of the six or seven trips.”

Cushing-Breeden added, “We don’t do this for praise or anything like this letter. I hope they never have to use our training, but how horrible would it be for them if they did need it and couldn’t. Helping empower people to try to help someone else or themselves is huge. We know that if we can start CPR quickly there is a better outcome – all we do is help our Vets and maybe our training can help someone else. It is truly an honor to support these folks.” 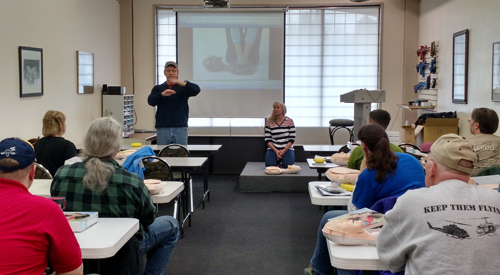 In the photo, (left to right) Rex Breeden and Vicki Cushing-Breeden teach basic life support and cardiopulmonary resuscitation (CPR) to Honor Flight Guardians in Alaska prior to a flight to Washington, D.C. (VA courtesy photo)