ORLANDO, Fla. – In May, Dr. Haru Okuda, SimLEARN national medical director, received the award for the 2017 Distinguished Educator by the Society for Academic Emergency Medicine Simulation Academy for his contribution to Emergency Medicine Graduate Medical Education through the creation of SimWars.

SimWars is a simulation-based competition between teams of residents that compete in various aspects of patient care focusing on critical thinking, teamwork and communication in front of a live audience. Originally created for the specialty of Emergency Medicine in 2007, SimWars has now been reproduced on four continents (North America, Asia, Europe and Australia). It has also been held at multiple national and international conferences representing diverse medical societies including neurocritical care, obstetrics/gynecology and oral maxilla facial surgery. In 2015, SimWars was published into a textbook entitled "SimWars Simulation Case Book: Emergency Medicine." 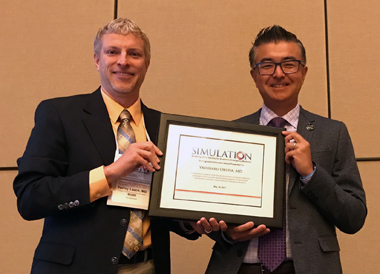