ORLANDO, Fla. – The VHA SimLEARN National Simulation Center partnered with the University of Central Florida, College of Medicine to host 120, third-year medical students in May. The purpose of the two-and-a-half-hour training was to involve the students in follow-up care of geriatric patients through Longitudinal Curricular Themes (LCT’s) which, according to the UCF College of Medicine website, “emphasize critical aspects of medicine and medical care that are not addressed in the basic core curriculum.” The LCTs addressed in this training were patient safety, medical informatics, geriatrics/palliative care and ethics/humanities.

The students were broken up into four groups of 30 students, and then broken into groups of six. The groups were briefed and sent to five different treatment rooms. Each room conducted the same scenario.

Each student had the opportunity to conduct a follow-up assessment of a geriatric patient following a fall. Standardized patients (actors) had a specific script to follow which provided the actor’s medical history, their environment and other factors that would help lead to a possible cause for the falls. Students also discussed ethical principles in practice and applied value clarification while constructing the range of preferences for treatment with the patient. They also had to identify types of medical errors (skill-based, knowledge-based, rule-based) and determine action plans to correct, mitigate or prevent the errors. The students were then debriefed on the training. 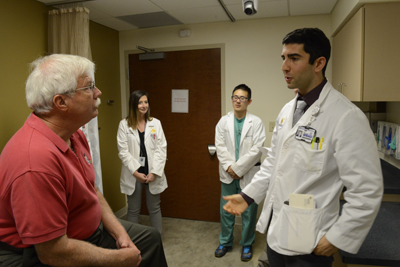 Ali Mozayan, a medical student with the University of Central Florida in Lake Nona, Florida, talks with a standardized patient during training at the VHA SimLEARN National Simulation Center. Note the camera at the top of the image. Cameras throughout the training areas record training and provide immediate visual feedback. (VA photo by Ramon 'Boty' Garcia)