Simulation training pays off during emergency

MARTINSBURG, W. Va. – On April 6, Sergeant Derrick Smith and Officer Edward Rollyson, with the Martinsburg VA Medical Center (VAMC), received the Department of Veterans Affairs Undersecretary for Health’s National Commendation award for an Act of Heroism. The clinical staff credited the two officers with saving a Veteran’s life due, in part, to the simulation training police at the Martinsburg VAMC received.

It was on Saturday, Feb. 18 that Martinsburg police were notified of a medical emergency in the Internet Café. Arriving at the main medical center building, Rollyson saw Veterans from the Café in the hallway waving for help. Hearing shouts of, “He’s not breathing! He’s not breathing!” Rollyson quickly saw a Veteran slumped over in a chair. After radioing dispatch for help, he assessed the condition of the Veteran and discovered the Veteran had no pulse or respiration and was unresponsive. Smith then arrived to assist.

The two officers quickly positioned the victim on the floor and began two-person cardiopulmonary resuscitation (CPR). As the code team began to arrive, clinical staff realized there was no crash cart readily available. Knowing where the closest crash cart was, Smith ran to primary care, retrieved a cart and ran back with it. Rollyson continued to administer CPR. Shortly after the arrival of the crash cart the patient developed a detectable pulse. The Veteran regained consciousness and was transported to the intensive care unit.

He is alive today due to the fast action of the two responding police officers. Police at the Martinsburg VAMC regularly train using simulation for a variety of scenarios and skills, including firearms training. According to the police training coordinator, Capt. Glen Bivens, every police officer is required to complete a minimum of eight hours of training every quarter. Additionally, Bivens organizes emergency response drills, staged during working hours. During the drills, each officer’s response, action and timeliness are assessed. Drills also include an after-action debrief for improving emergency responses and simulation training. 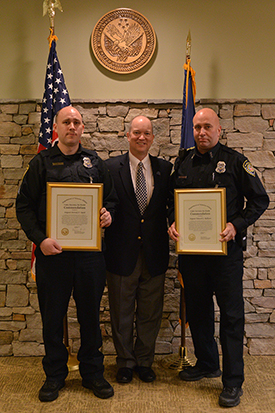