ORLANDO, Fla. – As a child growing up in the Alexandria, Virginia area, Haru Okuda, MD, loved playing the violin. Starting at age seven with the Suzuki Method, he learned early that practice makes perfect. As he developed skills as a violinist, eventually becoming Concertmaster for the Brown University Orchestra, Dr. Okuda realized a concurrent passion in the field of medicine.

His interest in medicine was sparked early in high school, while attending the Thomas Jefferson High School of Science and Technology. Coming from a long family history of physicians, Dr. Okuda knew one day he would have to decide between music and a career in medicine. He chose the medical career path, but realized early on in medical school and his residency that something was wrong with the traditional paradigm of how physicians and health care teams were trained.

“I found that musicians constantly practiced their music and repeated over and over again to a mastery level before a performance,” Dr. Okuda said. “While in medicine, medical students and residents were expected to perform at a mastery level with a ‘see one, do one, teach one’ training approach.” He added, “An additional challenge is that health care providers train in silos, with nurses and physicians in separate schools, only to come together after graduation and expect to perform as a team. This would never happen in music or sports, where they would rehearse together before their performance. “

From there, Dr. Okuda went to the New York City Public Health System, where he became founding director of the Institute for Medical Simulation and Advanced Learning and helped build a 10,000-square-foot simulation center focused on improving patient safety throughout the health system. His goal was to take his lessons learned in simulation-based training for medical students and residents and apply them to experienced health care teams.

All of this set the stage for him to become national medical director for the Veterans Health Administration (VHA’s) Simulation Learning, Education and Research Network (SimLEARN) based in Orlando.

Dr. Okuda has overseen the development of VA’s nationally acclaimed simulation program since 2011, applying principles learned from his childhood training as a violinist to develop simulation-based training for clinicians. He currently works with a team of clinical instructors, curriculum developers and simulation technologists to develop innovative immersive simulation-training programs to improve critical communication and training needs of the VHA clinical workforce. Key programs include Out of Operating Room Airway Management, Code Team Training, Central Venous Catheter Insertion Training, and the SimLEARN team is currently developing programs to expand clinical access for Veterans and improve patient safety.

In 2016, VHA completed construction of a 51,000-square-foot, National Simulation Center (NSC) in Orlando. In its opening year, SimLEARN trained over 2,000 learners through face-to-face programs, and over 100,000 providers and staff through its Resuscitation Education Initiative, which provides Basic Life Support and Advanced Cardiac Life Support across the system.

Under Dr. Okuda’s leadership, SimLEARN also developed a program to use simulation to test newly constructed medical facilities, prior to the delivery of patient care, in order to help them safely activate their hospital. This has contributed to the safe opening of multiple new VA medical facilities including the North Las Vegas VA Medical Center and Orlando VA Medical Center.

In an effort to ensure quality simulation-training programs, SimLEARN established standards in simulation through their SimLEARN Certification Program with over 50 medical facility simulation centers certified to date. To train future leaders in health care simulation, SimLEARN stood up six Advanced Interprofessional Fellowships in Clinical Simulation, in partnership with the Office of Academic Affiliations. These fellowships are based at VA medical centers in Dayton, Ohio; San Francisco; Providence, Rhode Island; Durham, North Carolina; Gainesville, Florida and Pittsburgh.

As a violinist he completed masterpiece performances. Now Dr. Okuda is perfecting new medical simulation masterpieces and continues to define simulation strategies for use throughout VHA.

“VHA is pioneering programs to improve health care outcomes and provide safe care for our nation’s Veterans, through the use of simulation-based practices. It is an honor and privilege to be able to contribute to the care of our Veterans for all they have sacrificed.”

Dr. Okuda was recently featured as a Health Care Change Agent in the 2017 Medical Training Magazine. (See link below) 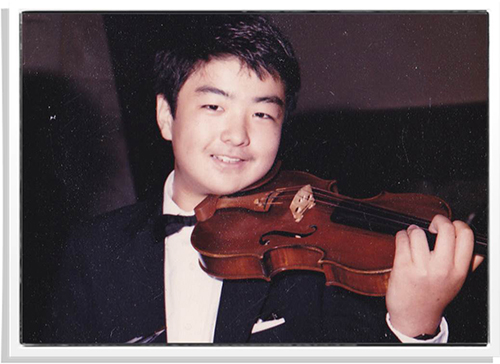 Haru Okuda practicing on his violin as a child. 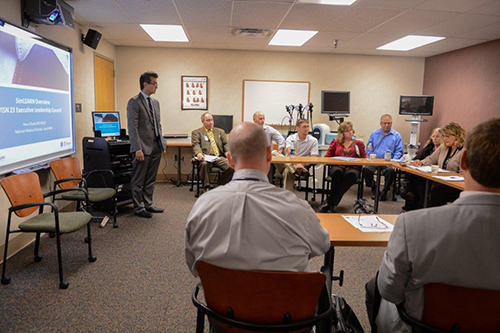 In this image, Representative Murphy (front left) and Representative Bergman (far right) are provided a demonstration of some of the capabilities of simulation by Dr. Haru Okuda (center), SimLEARN national medical director, while Mary Fakes, (back left) EES acting deputy chief learning officer, looks on. (VA photo by Michael Strickler)